Media Access Australia spoke to Robert Kingett, accessibility advocate, motivational speaker, author of “Off the Grid: Living Blind Without the Internet” and creator of the Accessible Netflix Project – most recently successfully advocating for audio description on Netflix’s Daredevil series. 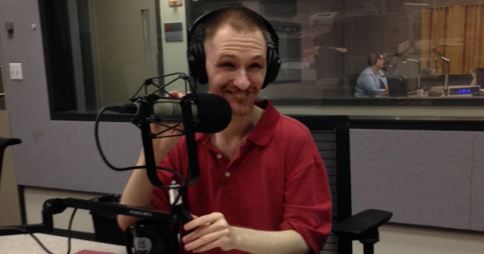 Robert shares with us his motivation to improve access to media, discusses how the Accessible Netflix Project began, provides his thoughts on the current state of video-on-demand services and shares some of his upcoming accessibility projects.

What was your motivation to start improving access to media?

Robert Kingett: To be clear, I am advocating for the better accessibility of digital media. What got me started advocating for digital media, and this includes the video game industry, e-books, and otherwise, to be frank, was because I saw so few actually trying to do it. Many people would rather sit on their hands or behind an email list and wait for groups to put digital accessibility at centre stage. I saw where the trend was going so I assumed the best thing to do would be to try to advocate where people would end up in a matter of years, [that is] mostly, digital.

How did the Accessible Netflix Project start?

The Accessible Netflix Project started out of anger, honestly. Way back in 2011 and even before, I began trying to gather people on mailing lists and trying to get them to advocate and to document their advocacy. People would rather write a whining email to a private mail list instead of actually doing something useful and documenting it on an open forum—YouTube, a blog, anything. When I wrote to these people and challenged them to take it to the media, or publish their inaccessible experiences, they told me it wouldn't do any good; so why bother?

If I can be frank, this infuriated me, that people would write a novel to an email list but do nothing more. I know that media can be very powerful. I was going to prove it. I was going to document everything for people to read and follow. I asked around to different bloggers and the like, but they all said the same thing, that it wouldn't do any good, and that we should wait for the American Council of the Blind (ACB) to consider this important enough to take centre stage. I didn’t accept that mentality and still refuse it with every inch of my bone. Media is powerful. I know. I work in media, so I started a blog, gained a core team, we blogged, and documented, and made videos, and blogged. We were going to publicise everything until it made a difference.

What motivated you to promote the petition to have audio description on Netflix?

To be clear, Ryan Dyck, the newest team member created the petition, but I felt that it was time to take this to the media to get sighted people involved. Many sighted people have never even experienced audio description but they understand the concept of inclusion and accessibility, even though they may not know everything that people need. I felt it was time to go really public with this, past the National Federation of the Blind (NFB) and ACB and every other blind group. We needed the sighted populations help and the Deaf communities help, and I thought a petition would be the best way to make our voices heard, even in the Deaf community. I wanted Netflix to seriously think about the future. It was a strategy that served well.

Can you share some past experiences where media has been completely accessible/inaccessible?

Where media has been completely accessible have been in the blind ghetto spaces, and illegal email lists and file sharing email lists. Only in those cases, I'd say true media accessibility rests for the visually impaired but times and companies are changing. Big [companies] are looking at Netflix and their new subscribers trickling in. That’s good. I want that to happen. I want others to take notice and follow them as a role model to advance media accessibility.

Companies like TalkingFlix and Zagga Entertainment are great, but I think it's even better that we have choices now. It encourages competition and innovation. Dollars talk. I want companies to get that all we want to do is just pay you money BECAUSE I know your content will be accessible to me. If I know you don’t have accessible content, you don’t get my money. It's that simple, and I hope other companies realise that disabled people want to support companies that support them.

Do you feel that existing video-on-demand services meet the needs of people disabilities? Why?

I don’t think so at all, because not every aspect of their sites and or services is accessible. Certainly usable, but not accessible. Most would debate me and say that they can use it just fine, but it's not accessibility just because a few can guess what that unlabelled button is for. In short, no, not accessible but times are changing and so are companies, so that’s changing.

Are there ideas for video on demand features that would immediately improve access for yourself and other blind people?

Oh, certainly. Ideas are in abundance in my head. In fact, people text me throughout the day to tell me to stop thinking because it's interrupting their cooking, but there are many people with better ideas than mine. So, rather than encompass a singular idea, I believe companies should hire an accessibility team to get many different ideas and point of views.

Just as an aside, I don't understand why so many blind people say there isn’t work out there. There is now, there's a ton of work because blindness is so foreign. Use that to your advantage. Contact papers and pitch stories from blind points of view. Contact video game studios and ask to be a paid accessibility consultant. Contact colleagues that don’t have an accessibility consultant and charge to be a part of their new accessibility team. Tell them you will hire your own team.

I believe that people should reach out to these places and offer your expertise. Become an accessibility team manager. Hire other disabled people. Build a division. I think that’s when ideas will do the most good.

The most important thing I have learned is two-fold. The first is that blind people need the Internet today. I have even been denied a job, and an internship, because I didn’t have the Internet and didn’t use the Internet. I learned how much harder it became to get information. People have often told me to think back in the seventies when there wasn't Internet. They couldn't have access either, but I think they are missing the point. Try to find a print phone book today. Try to find an almanac. You could live without the Internet back in those days because there was no Internet to begin with, so there was no challenge in not using the Internet.

In another way, living off the grid shows how much the Internet is ruining conversation and critical thinking. Everything on the World Wide Web is based around short attention spans. This is hugely damaging to critical thinking and research skills. The Internet, and people on the Internet, shouldn't cater to their audiences by making pieces shorter. People need to learn to read again. People need to learn to develop an attention span again. Don’t make short videos jammed with content just because your friend has the attention span of a flea. If you have something articulate to say, make a lengthy blog post and DO NOT include a TL;DR [too long; didn’t read] version. People need to read. People need to think, not just consume. That’s why I will never use TL;DR in anything I do. It's enabling. I will never enable my audience.

You also have experience in other fields of media, like gaming and arts. What are your thoughts on the accessibility of other media platforms?

Everything is getting there, which is a great thing. I think it helps that media is starting to report on this stuff. In fact, I encourage anyone who's disabled and into journalism, pitch the disabled niche to their paper or radio station or TV station. That will get companies raising their eyebrows and going, ‘wait a minute, reporters are reporting on companies making things accessible? What's accessibility? Maybe we should do this too!’ And then the ball drops.

Gaming is my passion above anything else, so I follow that scene closest and stick my nose in the most. It's improving, very fast. For example, Sony adding text to speech on the PS4, again, it helps when people such as myself report on this stuff. For instance, developers saw my IGN article and started seeking blind gamers out for paid consulting work, because now, since it has been reported, people understand and know there's a market to tap into. Sony has always been about accessibility though, even if they don’t do things as quickly as most would like. Microsoft as well. Both deeply care about accessibility. It will improve rapidly over the years, I believe.

In short, while everything isn’t accessible, it will get there, because people are speaking up and not relying on organisations and otherwise. People are using YouTube to show how blind people use cell [mobile] phones. I, for instance, have a channel dedicated to games and another one dedicated to showing accessibility on the web and software. People are watching, reading, and listening to the people. Because of that, it's improving and expanding quicker than most may think.

I plan to do a lot with media and employment. For instance, I have the gaming magazine called Gaming Glimpse that’s for everyone that’s written by minority and disabled writers, and they will definitely be paid, but it will be marketed to everyone. I'm going to do everything I can to get us out of our disabled bubble. For instance, I plan to start my own division and hire disabled reporters in places like the Tribune, etc., hiring our own disabled testers with game companies. Get disabled people using their disabilities as skill sets that could benefit companies and media outlets. I will also work my way up in media. When I get there, I will hire my own disabled team to work at these places. I don't know if it will happen, but that’s what I will aim for.

I am doing a lot of business emailing in the background, to these companies that don’t have an accessibility team or may not know any disabled people. I'm going to get in the door, if I can, and then turn around and hire reporters with disabilities, for example, so everything I am doing won't happen overnight, certainly, but I believe it's a win-win for everyone and would, hopefully, decrease the unemployment rate.

One of the reasons I keep pitching disabled stories to mainstream media is to get them to see a different angle. It's all about progress. I hope to help with the progression that’s already shaping.