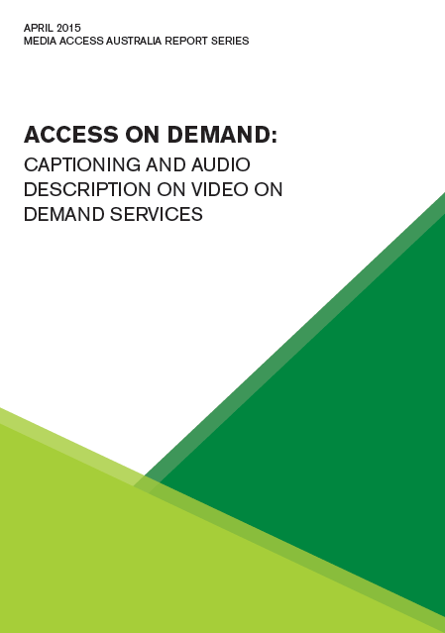 Media Access Australia has today launched Access on Demand, a comprehensive report on the accessibility of VOD services in Australia and other countries.

With the recent launch of Netflix in Australia, which follows on from the launch of other subscription VOD services such as Stan and Presto, 2015 has been widely touted in the media as a watershed year for VOD.

However, the report finds that as Australian consumers join the rest of the world in turning to the internet to watch TV programs and movies, access services—captioning and audio description—are not keeping up.

The US has legislation that requires any program broadcast on TV with captions to also be captioned when distributed online, but there are no such requirements in Australia.

The catch-up TV services of the free-to-air networks are the most widely-known VOD services among Australian consumers, but only three of them—the ABC’s iview, SBS On Demand and the Seven network’s Plus7—are currently providing captioning.

“This is terribly frustrating for Deaf and hearing impaired viewers,” said the report’s author, Media Access Australia’s project manager for television, Chris Mikul. “Having missed a program they know is always captioned on TV, they go to a catch-up service and find that the captions aren’t there.”

Netflix launched in Australia with close to 100 per cent captioning on its content, but it is an exception, with the other major subscription services offering no captions at all.

The report found that the situation with transactional VOD services (where consumers can buy or rent titles) is somewhat better, with significant levels of captioning on iTunes, Google Play and Xbox Video.

The report can be downloaded from the Access on demand: captioning and audio description on video on demand services email form.