CaptiView (pictured) is the most common closed captioning device used in Australia and the USA. The unit consists of an Organic Light Emitting Diode display on a flexible neck which attaches or sits in the cup holder. 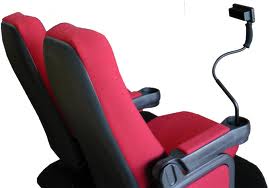 The screen displays captions as three lines of high contrast green text. The privacy visors surrounding the screen mean that the unit is more private and less likely to distract other patrons. Captiview can be used in any seat.

In 2012 Sony released to market its long-awaited Entertainment Access Glasses.

The lightweight access unit can be worn over standard glasses and delivers both closed captioning and audio description.

The unit works via Wi-Fi, with the patron wearing the glasses which are connected by wire to a small receiver that can sit in the patron’s lap or pocket. A small projector displays captions in front of the patron’s eyes. The captions appear in bright green and the unit auto adjusts its brightness to lighting conditions. Adjustment of distance is also possible manually.

A separate receiver can provide audio description or an enhanced soundtrack for people with vision impairments.

Watch a YouTube video from SGNL by Sony on the glasses.

Regal Cinemas in the USA has become the first major cinema chain to adopt the technology.

Sony announced in mid-2012 that it will not be releasing the Entertainment Access Glasses to the Australian market.

USL’s Closed Caption System (CCS) is a similar wireless device to CaptiView. The rectangular box is connected to a flexible arm which clamps on to your seat’s cup holder rather than sitting in it. The text is green on a black LED screen (white text is shown in photo, but latest models have green text).

The device is designed with custom optics which displays the captions as a virtual image to assist viewers in focusing between the captions and the screen. The unit can be used in any seat in the cinema.

USL also has a glasses system similar to Sony's.

Rear Window is a closed captioning system developed by WGBH’s National Center for Accessible Media. It works by transmitting the captions onto an LED screen located at the rear of the cinema. The captions are displayed in mirrored and then reflected by placing a Perspex screen in the drink cup holder in the seat.

This screen can be placed over the movie, replicating the look of open captions. The DAD system will also work with Rear Window as well as a compatible audio description service. Rear Window is popular in the USA and Canada.

Rear Window has recently been trialed at the IMAX Museum in Melbourne.

MovieReading is an app for Apple and Android smartphones and tablets that allows you to watch closed captions discreetly on your own personal device. The app is currently compatible with Epson’s Moverio BT100 glasses with plans for further compatibility with other interactive glasses in the future. The glasses replicate the effect of open captions, similar to Sony’s Entertainment Access Glasses. A video demonstrating the glasses is subtitled in English.

The app is free and caption files can then be downloaded for approximately $2 per file. Once inside the auditorium, the downloaded caption file is selected and as the movie’s opening credits begin, the app will synchronise the captions with the movie soundtrack.

What sets MovieReading apart from current closed caption technologies is that it is does not need to rely on captions being available directly from the movie, or equipment being supplied by the cinema. Movie patrons have the opportunity to be completely independent in watching captions.

Some accessible locations in Australia that are yet to convert to digital cinema use the older style Datasat Access Disc cinema access system (DAD). This is also used in New Zealand, the UK and parts of the USA and Europe. The system consists of a hard drive processor and the captions are supplied on a CD-ROM which is uploaded onto the hard drive.

How captioned movies are made

Captions are pre-recorded for a movie by professional captioners using specialised software that creates timecodes for each caption. This allows the captions be to synchronised with the movie.

The captions are saved in a digital file and provided to a post-production house for addition to the movie before release. Post-production for movies often involves video and soundtrack editing and adding visual effects and sound effects.

For closed caption production for digital cinema, which is the method being implemented under the Cinema Access Implementation Plan, the caption file is built into the digital cinema package (DCP) for the movie. A DCP is a collection of digital files used to store all audio and video components of a movie. Along with storing the files for the movie itself, a DCP will also have files that assist cinemas in organising and managing playlists of the movie, trailers and advertisements on different screens.

For open captions, the older style of production is for the caption file to be added to a separate CD-ROM that is played simultaneously with the movie. The system projects the captions onto the screen using a separate projector. This method is used with older-style analogue movies, which will become obsolete within the next couple of years as the cinema industry worldwide transitions to digital cinema.

Open captions can be created for digital cinema, although cinemas that have transitioned to digital have moved solely to more frequent sessions with closed captions.

Audio described movies are supported by both the older style DAD or Dolby access systems, or the newer digital cinema packages (DCPs). Regardless of the system, audio description is heard via a personal receiver the patron has with them in the cinema.

Australian cinemas use either Williams Sound or the Fidelio audio description receivers. Both systems are wireless, and Fidelio allows patrons to use their own ear buds or headphones that connect to a 3.5mm jack. Fidelio in Australian cinemas can also be used as an assistive listening device by accessing and augmenting the standard soundtrack, although both audio description and the augmented soundtrack cannot be used at the same time.

How audio described movies are made

Audio description for movies requires a professional describer to write a new script describing the visual elements of the movie. This same describer or a voiceover artist trained in audio description delivery will then rehearse the script in time with the movie before recording it. The recording of audio description, like captioning, is done in the post-production phase of movie making and done in a soundproof booth.