The recent Enabled Design-a-thon event was held in Sydney on 25-26 February 2017 with two Media Access Australia accessibility specialists taking part – Heidi Laidler and Monica Regalado. It attracted 16 teams of from 4-10 members who worked over the two days to design and develop prototypes of solutions to assist people with disability. 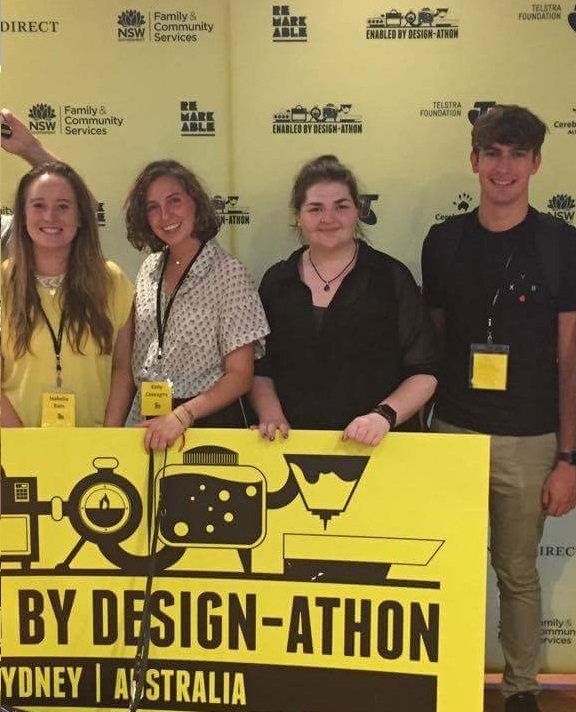 This hands-on event was organised by Remarkable, a division of the Cerebral Palsy Alliance. The first day started with presentations from organisers, sponsors, and a featured address from the NSW FACS Ageing Disability and Home Care Deputy Secretary, Jim Longley. Presentations were followed by a range of empathy exercises, designed to assist participants to understand some of the struggles encountered by individuals with disability. This included:

The sixteen teams taking part in Enabled Design-a-thon were then tasked with creating their idea to assist people with disability, and then pitching it and presenting their prototypes by 3pm on the second day.

Heidi’s team, aptly named Team Post-it (due to their generous use of post-it notes during ideation) designed a mobile application to assist individuals with vision impairment to explore new places with confidence. The app, named ‘Boundless’, provides accessible navigation in both indoor and outdoor areas, allowing users an accessible alternative to Google Maps as well as a way to find important landmarks inside buildings – such as the nearest bathroom.

‘Boundless’ also included an SOS function allowing users to send their exact location to an emergency contact or emergency services in the case of a serious incident. The app could utilise WiFi or beacon technology to navigate indoor areas as well as to pinpoint users exact location if the SOS feature is activated.

Monica’s High Fidelity team created a mobile app called ‘ToGo’ which they designed to enable people with disability to form meaningful relationships based on similar interests. In their research, the team found that many individuals with disability feel that they are often defined by their disability when trying to form friendships, rather than their interests.

While the two official winners of the day were certainly worthy, Media Access Australia’s User Experience Designer, Heidi Laidler, was most impressed with a team who created a device which can be retrofitted to electric wheelchairs. This two-purpose device can serve as a roof, protecting the user’s wheelchair from the elements, as well as being able to pivot and act as a small ramp, allowing individuals using the wheelchair to move over single steps such as gutters.