The Nintendo Switch console has a terrific new game that's accessible for the blind. Called 1-2 Switch, it allows two players to enjoy game-play scenarios by looking at each other and not the screen. 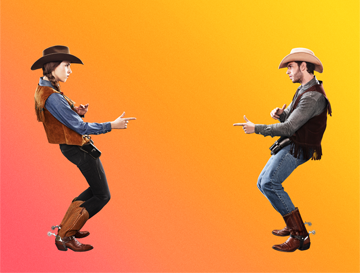 A cowgirl and a cowboy point fingers at each other

Played on the recently released Nintendo Switch console, 1-2 Switch is like a party-style game for two players, with the main innovation being that rather than looking at the screen, you look at your opponent or what you’re physically doing. You can stare down your opponent in a wild-west duel, rally for victory in a heated table tennis face-off, compete in a cow-milking completion, and play 25 more mini-games.

Each game takes advantage of the Joy-Con controller features of the Nintendo Switch system in different ways. And the good news for blind and vision-impaired people is that you are not excluded.

“The games use a lot of audio cues and rumble features in the controllers to tell the user when to react and how well they are doing,” says Media Access Australia Senior Digital Accessibility Analyst, Matthew Putland. “And this means that most of the mini-games in ‘1-2 Switch’ can be played if you’re blind or have low-vision.”

A woman whose husband is legally blind played the game for two hours together and they were able to enjoy most of the games that come in the bundle. “Out of the 28 games, he was able to play against me in 21 or 22 or of them, and he beat me most of the time. Even at ping pong!” she said in her online gaming review of 1-2 Switch.