A long-standing issue for caption watchers and producers is how fast should captions be? Some people have problems reading the captions if they display too quickly and others complain if captions are edited from the full speech so that there is enough time to read them. 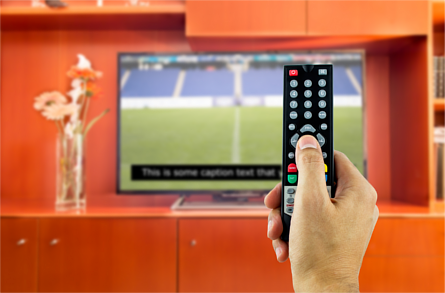 New research into caption speed by the BBC aimed to try and answer the question or see if it is really that important?

Caption reading speed is normally measured in words per minute (wpm) and general guidelines around the world have focussed on a speed of about 180wpm as being acceptable. This speed is the rate at which professional news readers and narrators read at. Often sports commentators or other non-trained people, such as in chat shows, will speak more quickly than this up to 250wpm or more.

The study by the BBC aimed to ensure that both block captions (where an entire phrase is displayed in one block) and scrolling (word-by-word appearing and usually used on live captioning) were included. The experimental material was made up of 24 videos, each 30 seconds long. There were three different videos and each one was captioned eight times at regular speeds between 90wpm and 230wpm. They were shown to both hearing impaired people (with both types of captions) and hearing people (with no captions). All were rated on a simple scale of “too fast” to “too slow”. The captions were always verbatim (not edited in any way for easier reading).

The study then turned to real-world captions to pick up on any other factors, such as some slower and some faster speech in the same video. All of these were far faster than the general guideline speed of 180wpm.

The results from these were a little surprising in that the real issue was ensuring that the captions matched the speed of speech. For example, two people having a conversation generally speak more quickly than a single narrator or newsreader.

Further investigation of complaints about captioning showed that most people don’t actually complain about reading speeds. They are picking on other issues, such as:

Captions being bunched up together and sent out too quickly, so they are seen as being too fast because not enough time is given to read them.

Delays in live captions where captions are usually 4-7 seconds behind the speech mean that people identify them as being too slow, where they are really referring to being too slow to appear.

The general idea is that there must be a point at which captions are too fast to be read, so therefore it is presented as a major issue, where it might not be.

The conclusion of the study is that well-timed captions are far more important than how fast they are appearing. Other issues which are equally important are accuracy and reducing the time lag for live captioning.

Media Access Australia’s CEO Alex Varley welcomed the study, stating “we have been advocating for many years that live captions should be verbatim, accurate and possibly not delayed.”

“This important study from the BBC agrees with that position.”

ACMA is also reviewing the caption quality standard, which will be open for public consultation. The review will be completed by March 2016.