Labour MP Lillian Greenwood has submitted a private member’s bill to the House of Commons in support of Subtitle It!, a campaign to improve the accessibility of video-on-demand (VOD) services. 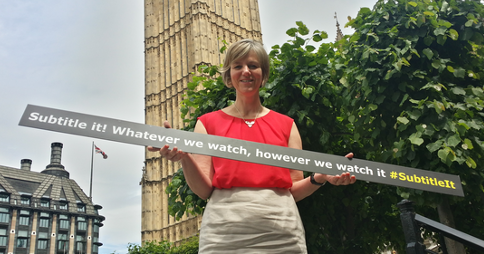 Subtitle It!, which was launched by the advocacy organisation Action on Hearing Loss in June, is calling for the Communications Act to be amended so that new regulations are included covering captions (called ‘subtitles’ in the UK), audio description and signing on VOD services. 3,000 people have now signed the campaign’s online petition.

“There is a compelling case for updating the law and I know just how much it would mean for people with hearing loss,” said Greenwood. “This measure has broad cross party support and I would urge the Government to make the most of this opportunity for change.”

In the UK, as in Australia, most content on VOD services is not captioned, even when it was originally broadcast on television with captions. “As technology changes, so does the way in which we watch our favourite shows and people with hearing loss have had enough of being left behind,” said Paul Breckell, Chief Executive of Action on Hearing Loss.

Action on Hearing Loss, the National Institute of Blind People (RNIB) and Sense (which represents people who are deafblind or have associated disabilities) have also released a document, Defining Progress for Access Services on Video on Demand (VOD), that sets out acceptable progress in improving accessibility by content providers, platform operators, device manufacturers and VOD services.

For more information, see the article on Action on Hearing Loss’s website.