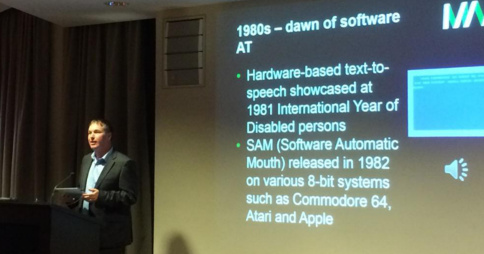 “We are entering an era when the cloud storage services (computing services delivered through a web browser) and social media are colliding,” Dr Hollier said ahead of his presentation on the accessibility of cloud services at the Australian web accessibility conference OZeWAI, being held 8-10 December in Victoria.

“The implication of that is that the accessibility of social media and cloud services—as well as the privacy and security implications—have become very important for people with disabilities.

“You probably don’t have to worry too much about putting one video up on YouTube or an image up on Facebook, but many people are now using these social media services as a storage mechanism for all their videos or to host whole photo albums.

“That has implications for privacy and security, which are magnified if at the same time those services aren’t accessible to people with disabilities.”

As part of his presentation on the cloud, Dr Hollier will also be discussing the findings of his research paper, The accessibility of cloud computing - current and future trends, which examines the benefits as well as the challenges of cloud services to business as well as consumers.

Dr Hollier said that while there were a number of cloud access issues that still remained, it was promising to see improvements, such as Dropbox announcing improved accessibility, as well as improvements to Google’s Drive and major cloud provider IBM appointing a chief accessibility officer.

“It is also very promising that the major web technology HTML5 has become a standard of the Worldwide Web Consortium (W3C), the body that oversees the web, which means we should begin to see more accessible media players and more accessible cloud services,” he said.