Media Access Australia spoke with Quentin Christensen, accessibility advocate, indie developer, winner of the ACCAN Apps for All Challenge in accessible gaming and author of the ‘Making Windows 10 Easy’ series of books. 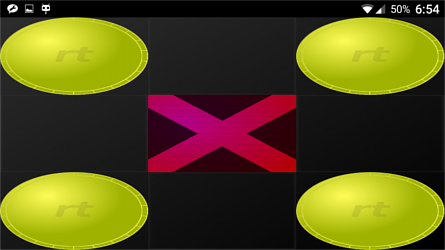 What motivates you to advocate for accessible development?

I'm vision impaired myself, being born with congenital cataracts and I use large print/magnification in my daily life. My wife is totally blind, so between us having things which are accessible to both blind and low vision users is very important. I've also worked for over 10 years teaching people who are blind, have low vision or other needs to use technology and I've seen firsthand the benefits accessibility provides. Making things accessible has benefits to those who don't need accessibility features too. For instance, high contrast white text on black is not only easier for someone like myself to read because without broad areas of bright back-lit white (like Microsoft Word), there is less glare, but on a portable device, having fewer pixels illuminated uses less battery too.

Your game RapiTap! recently won ACCAN’s Apps for All Challenge in the Most Accessible Game category. What was your motivation to create the game?

Partly I had played a few games which had some of the elements of RapiTap! and felt I could take the concept further, and partly I felt I could meet the challenge of making a real-time, reaction-based game which was accessible. There are numerous "turn based" games where you can take your time to make a move (maths games or minesweeper for instance), but not many where you need to be as quick as possible to get a better score and which also work with audio alone. Because the speed of RapiTap! is based on your reaction time, it allows you to play at your own speed, regardless of how fast you are or how much time you need to process your move. Coming back to the benefits for all users of accessibility, because there are options for very easy-to-see colour themes as well as audio, the game is perfectly playable by someone sitting on a bus with the sun in their eyes for instance, or with your phone in your pocket on the train for safety.

How have the general public responded to RapiTap!?

The reaction to the game has been overwhelmingly positive. The game has only had one less than perfect review, and I was able to reach out to that player and resolve her issue (which was with her handset rather than the game). I did include "Accessible game" in the title to make it particularly easy for those looking for accessible games to find, however my intention from the outset was always to make a game which was fun for the general public to play, and which also happened to be accessible, rather than something perceived as "a game specially written for blind people" - not because there is anything wrong in making something for a specific market, but more that there is no reason you can't make something with broad appeal which also happens to be playable by anyone.

Can you share some notable accessibility experiences you have had building, testing and using apps?

Making RapiTap! there were a couple of times I had to make a choice between several similar elements to include (e.g. the type of grid) which wouldn't have appeared any different to the end user, but I found one accommodated labels which TalkBack would read and one didn't – so if I hadn't considered that from the outset, it might have been annoying to add in later, but it also ended up giving me a bit more freedom and those same aspects that enabled accessibility also enabled slightly easier ways of adding a couple of other features I thought up later.  As a user myself, I have reached out to a number of other developers of apps that I (or my wife) would really like but which were inaccessible to us for various reasons. I've found that many developers are quite open to making improvements to make their apps more accessible, and generally it's a lack of awareness rather than not wanting to be inclusive. The best approach is definitely politeness – no one likes to be threatened out of the blue, and even if it's the tenth inaccessible app you've tried to use today, it might be the first time anyone has actually approached the developer to inform them of it. That is why ACCAN's Apps for All Challenge and similar initiatives are so important in raising awareness of issues many of us reading this face every day, but which others in the community may have never encountered or considered.

Can you tell us about your series of books on Windows 10 accessibility?

My first book is called "Making Windows 10 Easy to See". It's designed to walk you through choosing a device, getting your work area and PC set up with Windows and then take you through the features of Windows 10 with particular emphasis on the accessibility features. Not only Magnifier and High Contrast mode, but also Narrator and using the keyboard.  There are activities to help reinforce the concepts presented in the book as well as "cheat sheets" at the end and each of these include the keyboard, mouse and touch steps, so that they are accessible to all users.  Despite the "Easy to See" name, several of my proof readers are totally blind and used the book alone to guide them into the world of Windows 10, so I am quite confident that it is a very accessible resource for totally blind users moving to Windows 10 as well as those with some or even full sight. The book (as well as a shorter version with less on accessibility for fully sighted users who don't want as much detail) is available from the 22 Point publications page at a discounted rate for the next couple of weeks.

What are your most significant accessibility findings using Windows 10?

Having moved from primarily Windows 7, I have really appreciated a number of accessibility improvements initially made in Windows 8 but often overlooked due to the problems with the user interface. Things like extra Narrator commands, and while it's not comparable with say NVDA, I would say it's actually now at least an option for some users who use magnification but want easy access to having , say, documents read out.  I also really like being able to use High Contrast mode with full screen magnification. Of the new features introduced in Windows 10 I think Cortana is definitely going to be big, and even though it's not officially available in Australia yet, it's still possible to set it up and use it for voice commands and dictation. The return of the start menu, while not strictly an accessibility feature, is a welcome relief for many and certainly aids useability. The task view button allows ALT+TAB like functionality to switch programs without the complexity of holding down multiple keys at once. The action center collates all the information you previously only got in hard-to-read pop-up balloons.

Finally, the fact that Windows features will be upgraded regularly and gradually produces both potential accessibility challenges (things might suddenly stop working) and benefits (changes should be small and there will be no learning curve next time you buy a new PC). I have rambled in more depth on my blog if you would like more info on some of those points.

Are there any accessible developments we can expect from 22 Point in future?

Absolutely! I have I think more ideas for apps than I have time to implement them, but I am planning a number of things, from an iOS version of RapiTap! to a number of more productivity type apps, and of course more games and recreational apps as well.  I also enjoyed writing "Making Windows 10 Easy to See" and have the outline of an "advanced" book in mind if there is interest, as well as ideas for several other books down the track.  If anyone has any feedback, would like more info, or would like to be notified when new apps or books are available, I'd love to hear from you at help@22point.com.au or visit the 22 Point website.