Microsoft's Surface tablet has promised to deliver the best of both worlds: an easy-to-use tablet for games and entertainment but also a serious productivity device that has a detachable keyboard, trackpad and Office software. Our interest though lies in its accessibility – is it a worthy purchase for people with disabilities?  Dr Scott Hollier road tested the Surface tablet to find out how it fares for accessibility.

A 32GB Surface running Windows RT costs around $650 including the Touch cover.

There are a number of features which make the tablet easy to use and versatile: 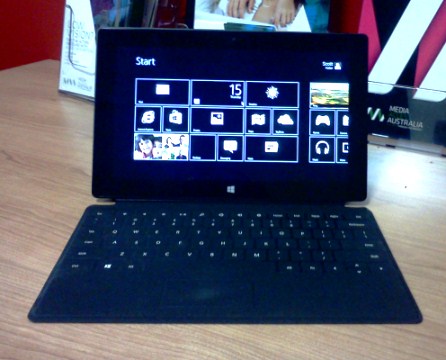 Aside from the kickstand, the big talking point of the Surface is its Touch cover which is a keyboard, trackpad and screen protector all rolled into one. The Touch cover feels like a rubber mat which can be attached to the tablet through magnetic connecters. Like the power plug, it’s great as a vision impaired user to be able to put the Touch cover on the desk, wave the tablet near it and have the two connect with a satisfying ‘click’ noise.

Microsoft also offers the Type cover for the Surface, which should offer a more natural typing experience. The Type cover is a slim, traditional keyboard that doubles as a cover for the tablet. Alternatively you can plug in a full-sized keyboard using the USB port.

Using the Touch cover is similar to typing on a netbook with the added feature of a touchscreen.

Surface comes installed with Windows RT, a 'light' version of Windows 8. Another version of the Surface will be released in early 2013 which will run on Windows 8 Pro.

For accessibility testing purposes, Windows RT and Windows 8 Pro are identical in their built-in accessibility features. However, the RT version of Surface cannot run traditional software, only apps available in the new Windows Store. So if you want a Surface but still want to install older assistive technology software, it's best to wait and buy the Surface with Windows 8.

Getting around the new Windows interface

Windows RT on the Surface tablet incorporates two worlds in one by providing an option to use the new touchscreen-based interface and the traditional desktop interface.

In the touchscreen, Windows RT environment, the iconic Windows Start screen has been updated. When you turn on the tablet, you get a series of tiles containing apps similar to an iPad or Android tablet.

With Surface there are a few ways to interact with the interface. You can either use your fingers to swipe across the screen, use the trackpad to move the mouse or use keyboard shortcuts. With Magnifier turned on, I often use a combination of all three.  I have often stuck to using the traditional keyboard and trackpad, but it was nice to just push (or swipe) something around the screen to speed up the process. These command gestures differ from the ones used on other tablets but with a bit of practice they become fairly intuitive.

In the traditional desktop environment, you can view apps and programs as you would in previous versions of Windows. It should be noted that Windows RT only runs pre-installed apps and apps purchased from Windows Store. However the Microsoft Office suite for Windows RT comes pre-installed on the Surface and can be run in the traditional desktop environment. The pre-installed versions of Office are the new 2013 version which at the time of writing is in preview. Office will be automatically updated once a full version is released.

Many have noted their disappointment that older Windows software can't be installed on this version of Surface. However the Windows Store is growing at a speedy rate every day with more apps becoming available as more developers create them for Windows.

Across Windows 8 and RT devices, Narrator and Magnifier have been upgraded to be touch-compatible. One major improvement to Windows is that the operating system remembers your preferences whenever you log onto another device through your Outlook account and launches accessibility features at start-up.

Magnifier now includes touch support and can be turned on in the Ease of Access Center. You can access this through either the desktop or the New PC Settings. You can also use the Windows and ‘+’ shortcut to activate Magnifier.

As soon as you connect a keyboard like the Touch cover and start moving the mouse instead of the screen, the bars disappear and Magnifier works in a similar way to its older version. While the bars don’t feel as intuitive as the zoom on an iPad where you can just grab the screen and move it around, it is an effective compromise in giving people both traditional control and touchscreen control of the magnified area.

When I mention that Narrator has been upgraded, the general response I get from people is "about time". It’s fair to say that Narrator has not been a high priority for Microsoft given it has been 12 years since its last major upgrade. In fairness, the new touch-friendly Narrator is good for basic screen reader functionality. Turning it on allows you to explore the screen by touch, tapping once to select an area to be read, and tapping twice to select or activate something. The double-click can also be done by moving a finger around the screen until you find something and then tapping the screen with a different finger.

I used some of the basic Narrator commands and was able to fairly effectively navigate the Surface without vision, select options and get basic access to web pages. Traditional screen reader users will still want something more than what Narrator offers, and with NVDA’s new touch-friendly version around the corner there are some good things to look forward to in the not-too-distant future.

One important point to note is that while it is possible to run Magnifier and Narrator at the same time, it becomes unwieldy to use. A warning message appears saying that the touch interface options for Magnifier won’t work when Narrator is running so the only way it can effectively operate in this mode is to use Narrator by touch or keyboard and Magnifier by keyboard only.

Another accessibility feature worth noting is that when the keyboard is removed and the Surface is just used as a tablet, the on-screen keyboard automatically recognises that there’s no physical keyboard and it kicks in. It also performs the same trick in reverse, removing itself when a traditional keyboard is plugged in.

Many people have also praised the fact that most hardware devices can be plugged straight into the USB port of the Surface and just work which is very helpful for people using a variety of assistive technologies. Software-wise it’s also possible to search the Windows Store for apps which have been created with accessibility in mind, so this is very helpful for people wanting to stick with things which will definitely work with the built-in tools.

Listen to Scott discuss the Surface on the Media Access News podcast.