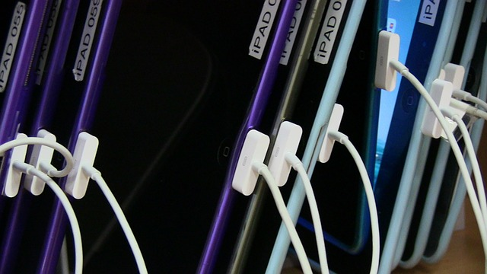 What are the challenges that students with vision impairments face in trying to access the curriculum?

Lyn Robinson: The classroom is full of educational materials that rely on vision. From print in textbooks to information on the whiteboard, vision is the primary sensory channel used in learning.

If you have a vision impairment then much of what takes place in a classroom may be difficult for you to access and your ability to participate in class may be severely compromised. Assistive technology is used by students with vision impairments to help provide access to learning and to maximise their participation in school life.

Prior to using iPads, what kind of work-arounds, or other technology have vision impaired students had to rely on?

We did a scoping study before the iPad Project to ask students what assistive technology they were using in class. Many students reported using laptops with voice or enlarging software. However, younger students had less access to computers because the priority was to provide computers to older students.

Other assistive technology used in the classroom included Electronic Magnification Units (small closed circuit cameras for focusing at a distance and at print in books on the desk), hand-held magnifiers, monoculars and braille devices such as BrailleNotes.

Students also relied on having their books produced in alternative formats such as large print, braille, e-text and audio books; a process which can take several weeks to produce.

Access to whiteboards was provided by technology which was connected by leads to the student’s laptop. Many of these solutions involved carrying bulky equipment from one classroom to the next and students would often complain about the lack of portability.

Could you detail the iPad Project and how it came about?

The Statewide Vision Resource Centre (SVRC) received funding from the More Support for Students with Disabilities National Partnerships program, a State and Federal government partnership, to fund an assistive technology library for students with vision impairments.

The iPad didn’t fit into the traditional definition of assistive technology, so it wasn’t clear whether or not to fund this type of technology and there weren’t any studies to refer to for guidance.

Visiting Teachers and staff from the SVRC met and shared stories about how early adopters were using iPads. We noticed, for instance, that some senior students were using scientific calculator apps on the iPad for chemistry and other students had loaded textbooks onto their iPads.

One visiting teacher related how a young student had proudly declared she had “taught herself to read” with her iPad. The Visiting Teacher asked her how she had done this and she said, “Easy! I listen to the book first on my iPad and then I turn the sound off and read it. If I don’t know a word, I just turn the sound on and listen to it.”

There was enough anecdotal evidence to suggest that something interesting was going on, so we decided go ahead and deploy the first rollout of iPads. As this was a fairly unique opportunity we decided to research how students were using the iPads in school. Permission was granted by the Victorian Department of Education and Training for the study and written consent from the schools and families obtained by the Visiting Teachers.

How are students using iPads to access the curriculum?

Overwhelmingly the majority of students, 80 per cent, were using the camera. They used the camera to do tasks such as take pictures of print or graphs in textbooks. The students would then enlarge these pictures on the screen to see the detail. They also took pictures of the whiteboard, friends and family, including the family pet in some cases.  When asked, “What app wouldn’t you be without?” 79 per cent of the students said, “The camera app.” It was a big hit with students.

Because students with vision impairments are such a heterogeneous group we wanted to know more about particular groups of students. Of the group of blind students for example, their preference for accessing the curriculum was auditory. Students reported using VoiceOver to read books and documents and to navigate the iPad. They also used the iPad for audio recording, audio games, talking calculators, talking clocks, audio books, educational apps, accessing maps, timetables, email, Safari, Reminders and Calendar. This group was also starting to use braille devices with the iPad.

We also learned a lot about the preferences of students with vision impairments and learning disabilities. They were using VoiceOver, voice recording, audio books and also showed a strong preference for using Siri.

What benefits or improvements to access have resulted from using iPads?

The majority of participants strongly agreed that iPads had increased their use of technology, their independence and their access to the curriculum.

This is a typical comment from a student (in Year 10) about the benefits of using an iPad in the classroom:

“In cooking theory I can take a picture of the teacher’s notes on the whiteboard rather than having to copy the notes down. I can then write the notes out, or if it’s a good picture, I just save the picture. It’s a quick and easy way to get notes off the board.”

When asked, “Has using the iPad made you more independent?” the same student said:

“Yes, because I don’t have to rely on the teacher to tell me what to do because now I can just use the camera to zoom in on the whiteboard to read whatever’s on the board.”

Even students in the first few years of primary school were using technology on a daily basis. Benefits have been reported across all the groups in the survey: all ages, all school settings, all levels of vision impairment, including students with additional impairments.

Are there particular features in iPads that lend themselves to students with vision impairments—compared to Android- or Windows-based devices?

I’ve mentioned portability and the camera before but the accessibility features also rated very highly with students because of the ability to customise the iPad.

Once you have acquired the skills to work with a particular accessibility feature such as Zoom or VoiceOver, you can navigate easily and do much of your school work on the iPad. It has become second nature for students with vision impairments to dip in and out of an accessibility feature. Students can have Zoom running in the background, double tap when they want to enlarge something on the screen and then double tap again to turn it off. They can customise the iPad to their own preferences and it is very empowering for them. They are in control.

I can’t really speak for the Android - or Windows-based devices, as our study didn’t cover them (they were not an option a few years ago when we started this project). The feedback I am getting is that they are greatly improved and offer similar features and a solid platform.

I think they are a very good option for some students and we do have some students using them. If the word around the assistive technology blogs is anything to go by, many believe it’s only a matter of time before Microsoft really gives Apple a run for their money in this area.

What does the future hold for improved access to the curriculum?

Schools in Victoria are putting a lot of effort into providing an accessible education system but there are many factors which need to work together.

Technology companies, teachers and education systems all need to work together to empower students with vision impairments to access the curriculum and experience an education like other students do, one which allows them to fully participate and reach their potential.

Teachers and specialists in the field of vision impairment are embracing the digital age and making good use of electronic educational materials which can be accessed in any number of formats. Many schools have access to publishers who provide textbooks online for students to download onto their iPad. iTunes offers a variety of apps which meet the additional educational needs of a diverse range of students. Features like Siri are providing options for students who are blind and who also have a learning disability.

The iPad has revolutionised access for students with vision impairments in the classroom but it is only as good as the next version of iOS. It would be nice to think that the quality of accessibility features Apple has provided in the past will continue but there are some concerns amongst accessibility specialists and consumers who believe that Apple’s accessibility features have gone backwards with the recent versions of iOS. Blind and vision impaired students need reliable, stable operating systems.

That having been said, it is important to remember the many ways in which iPads are assisting students with vision impairments to access the curriculum in classrooms on a daily basis. This is exemplified in the following comment by a visiting teacher about the importance of the iPad to her student who is blind:

“The power and potential of this device for her has been extraordinary – her social and tech skills have expanded exponentially since the day she got her iPad. It goes everywhere with her and she is now contacting app developers and reviews apps with ViA (Visually Impaired Apps) to apprise them of inaccessibility issues with apps, etc. She teaches her sighted friends new apps and is developing a high level of skill with internet access and in the blogging/vlogging world.”

The use of iPads in schools by students with vision impairments is an innovative and effective way for students to gain access to the curriculum in the classroom. The ability of students to maximise the potential of this technology is enhanced by inclusive practises in classrooms where teachers, visiting teachers and schools are supportive of the use of iPads and where Apple continues to support the concept of universal design in technology.

Lyn Robinson is Assistive Technology Teacher and Principal Researcher – iPad Project at the Statewide Vision Resource Centre, part of the Department of Education and Training. She can be contacted by email.